I have only been knitting in the round with DPNs for a few years now. I shied away from this type of knitting for a long time, as it was all toooo scary, but now I love it and it has become like second nature. It can feel a bit awkward and fiddly to start off, but with practise it does become easier.
The advantage of using DPNs is there are no bulky seams and less sewing at the assembly stage. A stockinette is produced, no need to knit and purl as it is all knit. This method is also necessary for small tubes, such as socks, gloves, the crown of hats etc. when circulars will not do. 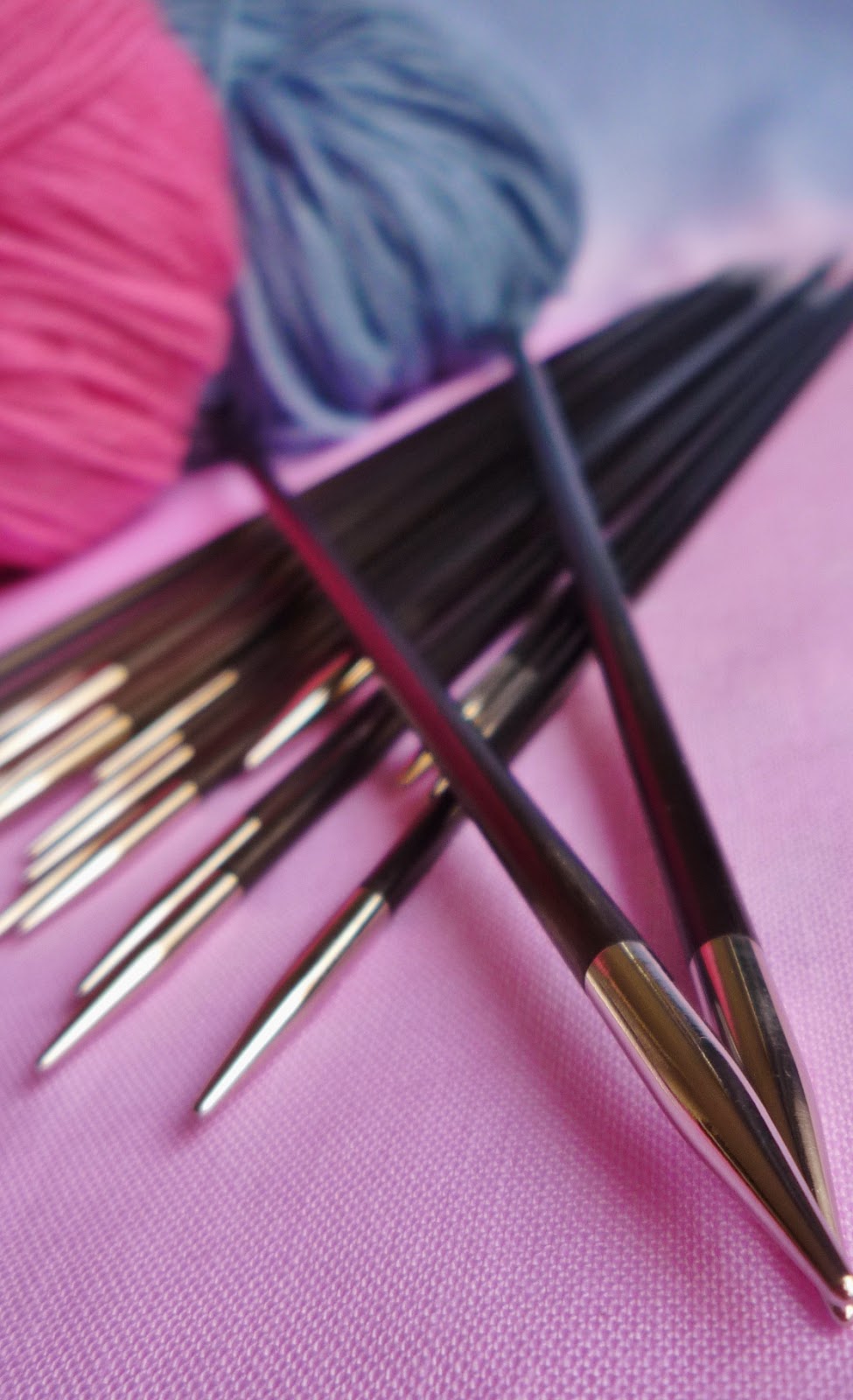 What type of needles
I prefer carbon fibre needles as I am a very tight knitter and with these needles the stitches glide easily. However for beginners, bamboo or wooden DPNs are probably better as stitches wont slip off the end. Needles come in sets of four or five. I tend to use just the four needles and have the fifth as a spare.
Charity shops can be good to find needles, but take you needle gauge with you.

Casting on
Cast on all stitches onto one needle......

then transfer the stitches, redistributing them evenly among two of the other needles. Transfer them by slipping stitches purlwise. Firstly, slip a third of the stitches onto one of the free needles. 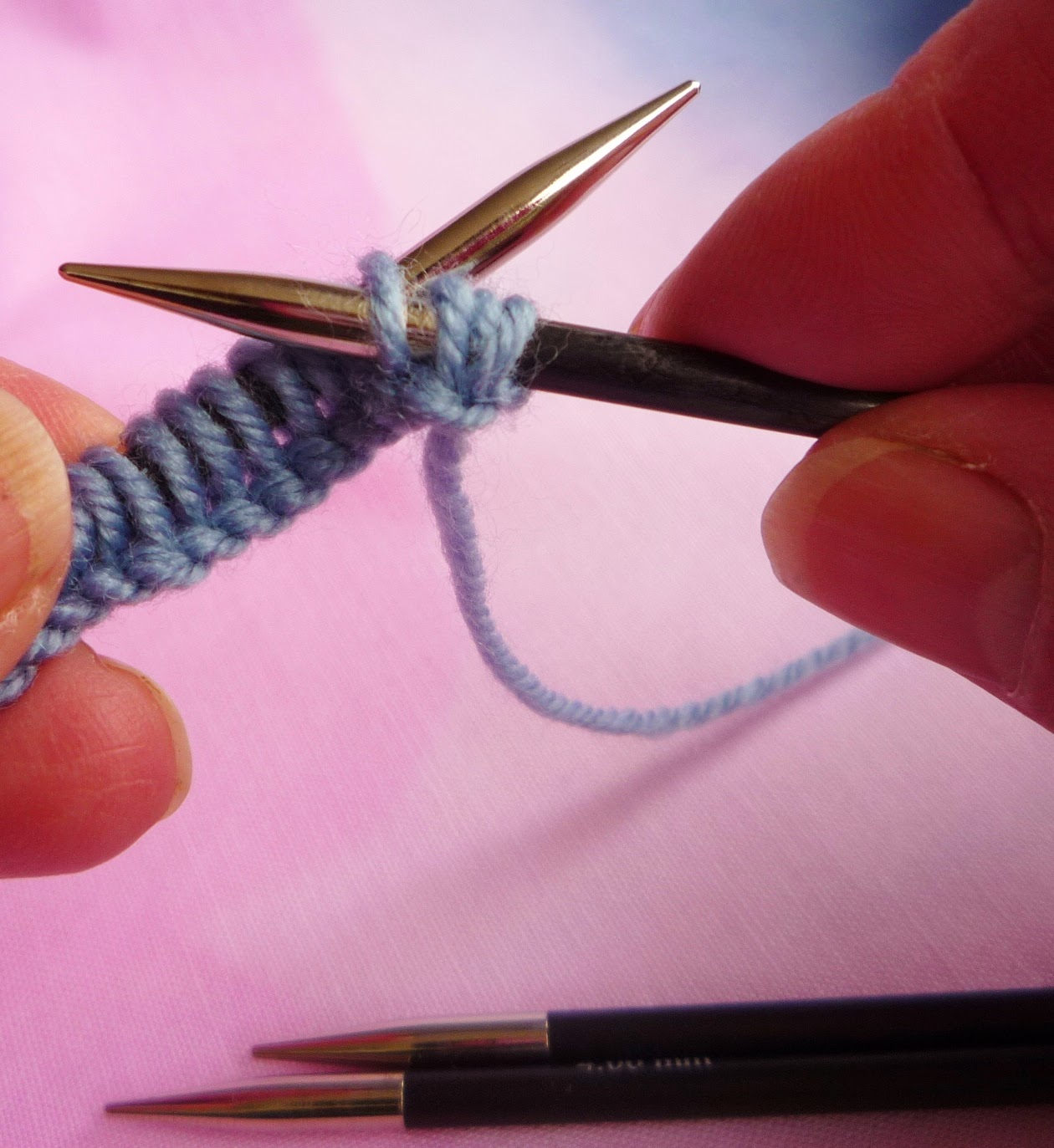 Then slip a further third onto another of the needles, leaving one free (working needle). 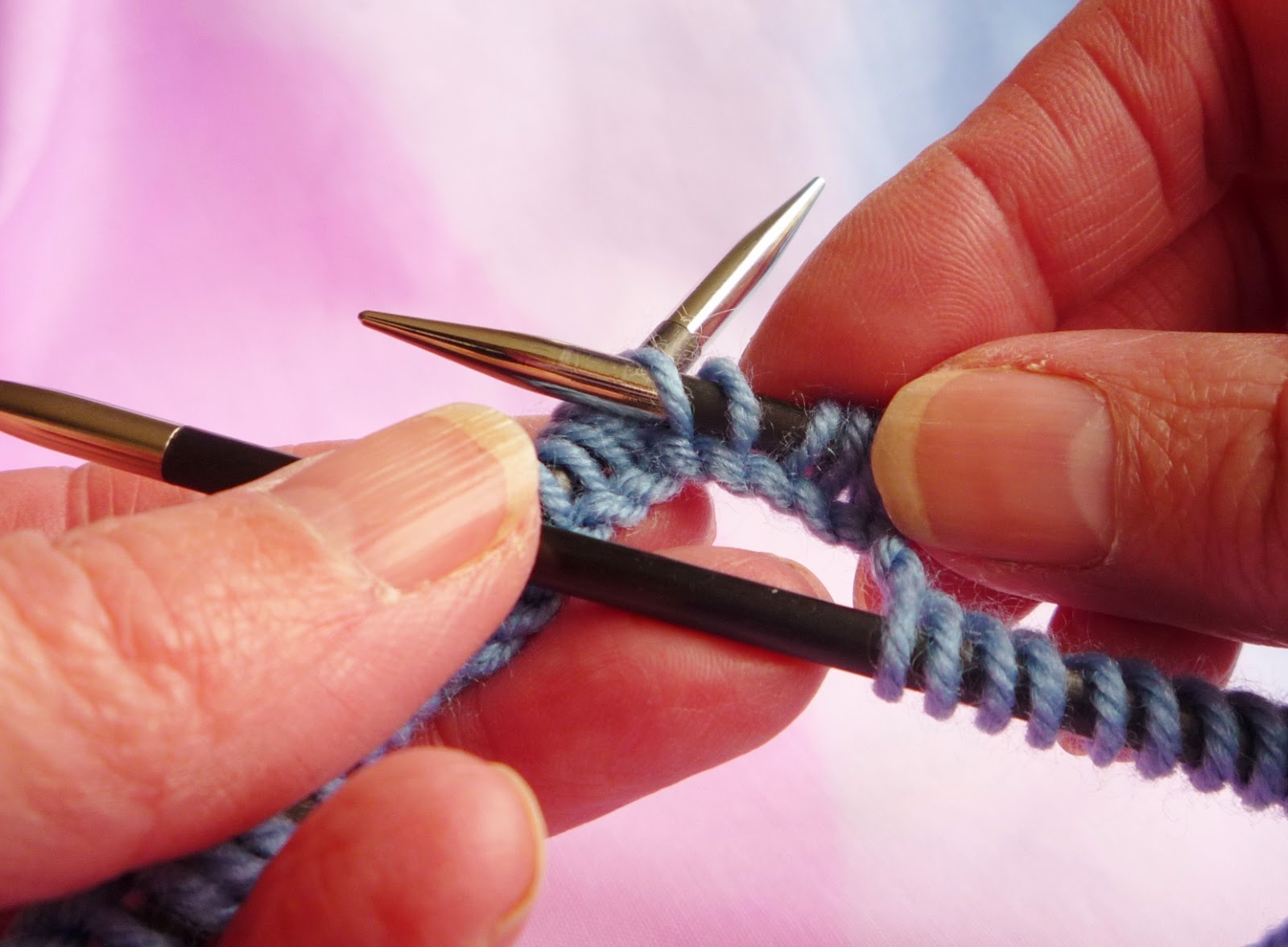 Keep stitches in the middle of needles to avoid them slipping off the end when they are not being worked.﻿

Place work flat on the table, making sure stitches are not twisted and all of the "bumps" of the cast on stitches are facing inwards. The needles form an open triangle which needs to be joined. 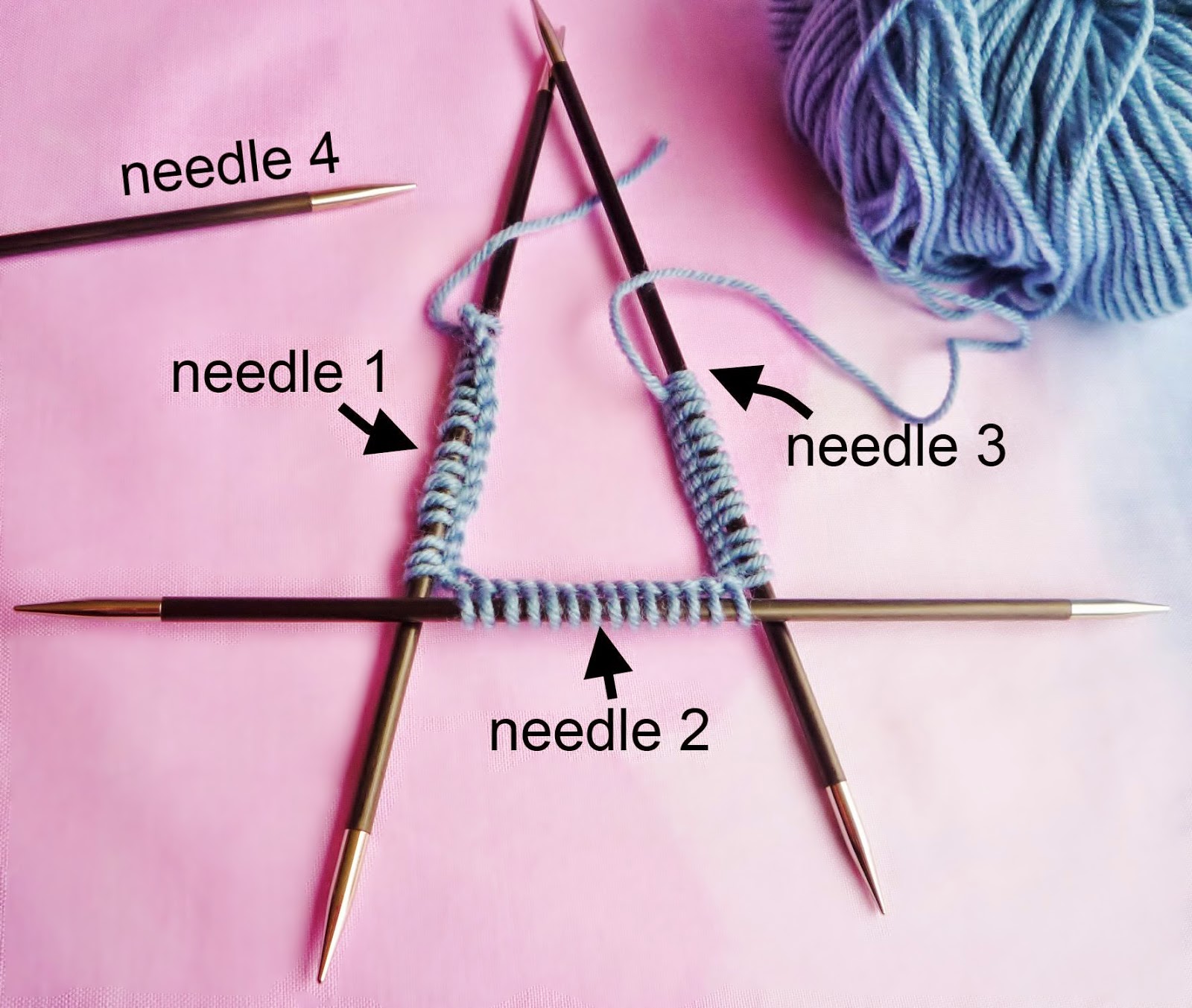 Joining in the round
Knit the first stitch on needle 1 (the first cast on stitch) with needle 3 - the triangle is now joined. 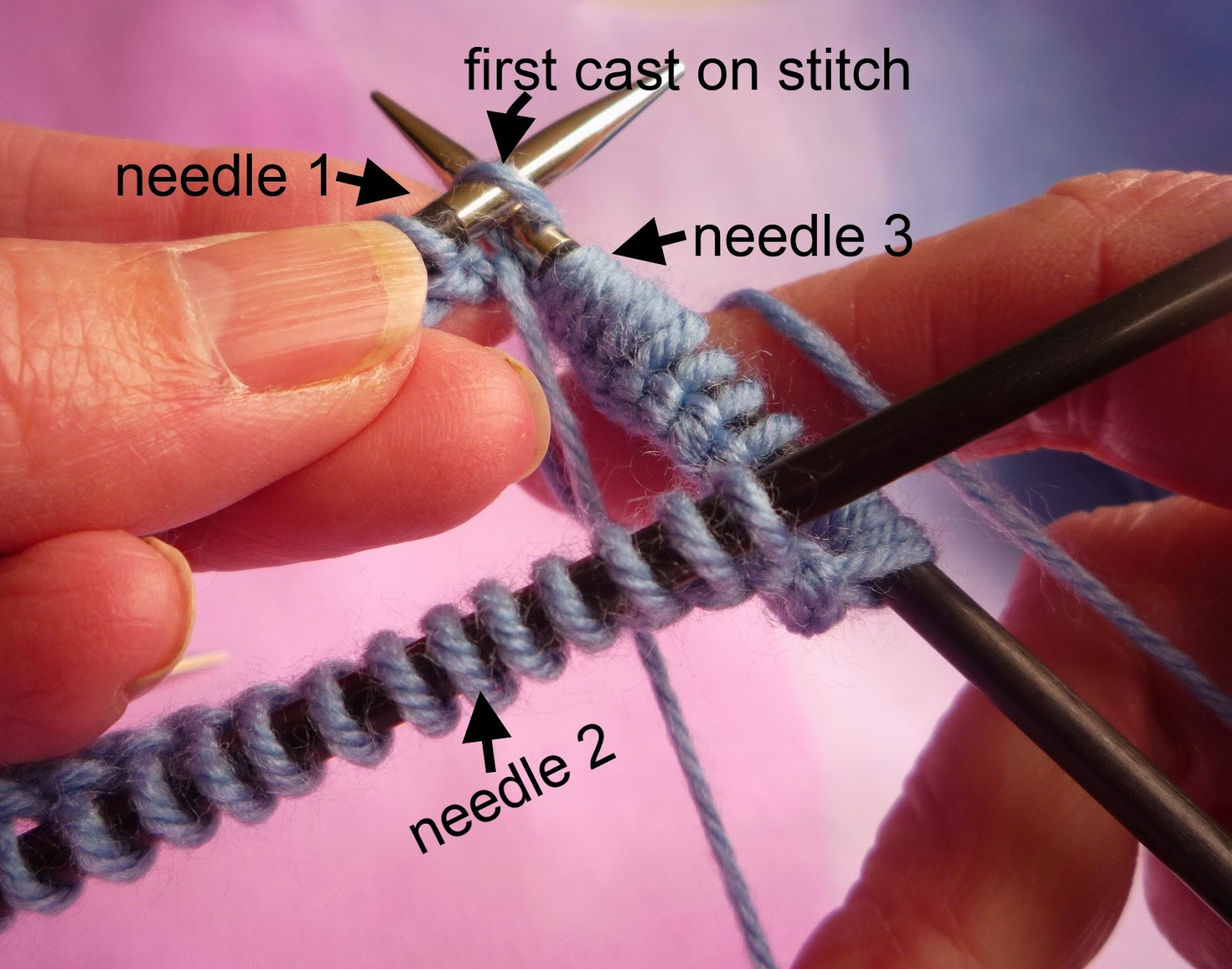 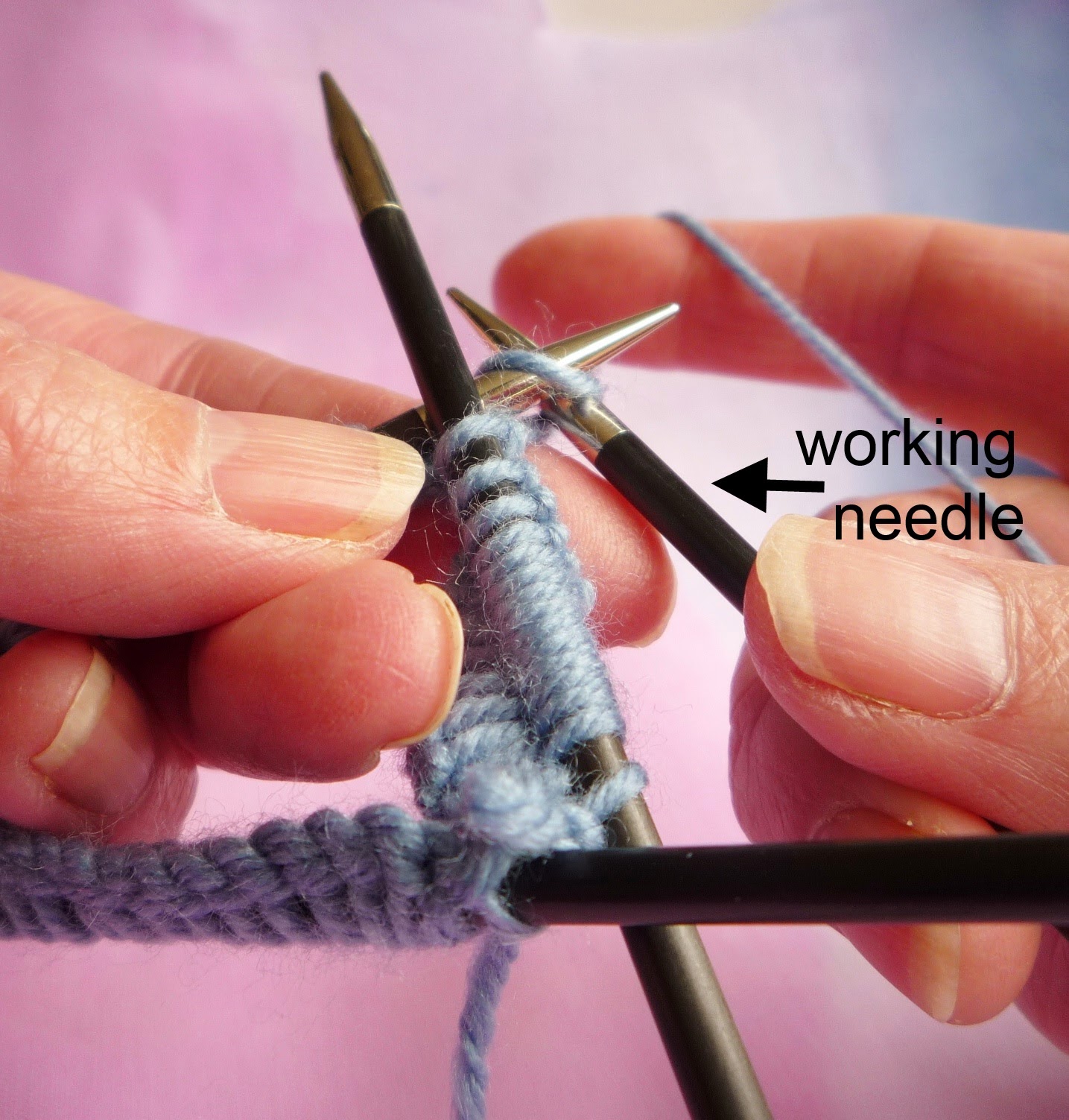 The first row is quite tricky so work slowly.
Slide stitches to the centre of the needle when not in use, then slide them to the end when it is time for them to be knit.

Stitch markers
No need to buy fancy stitch markers, which inevitable end up down the back of the sofa. For a cheap alternative, just use scraps of yarn in a contrasting colour than the project. Cut a piece of yarn about 6 inches (15cms) long and make a slip knot, like the first stitch of casting on. Then trim the ends. I always insert the marker between the last stitch and the one before the last stitch, so I know that the round is completed. If you prefer not to use a marker, you can keep an eye on the cast on yarn end, as his indicates the end/beginning of a round. 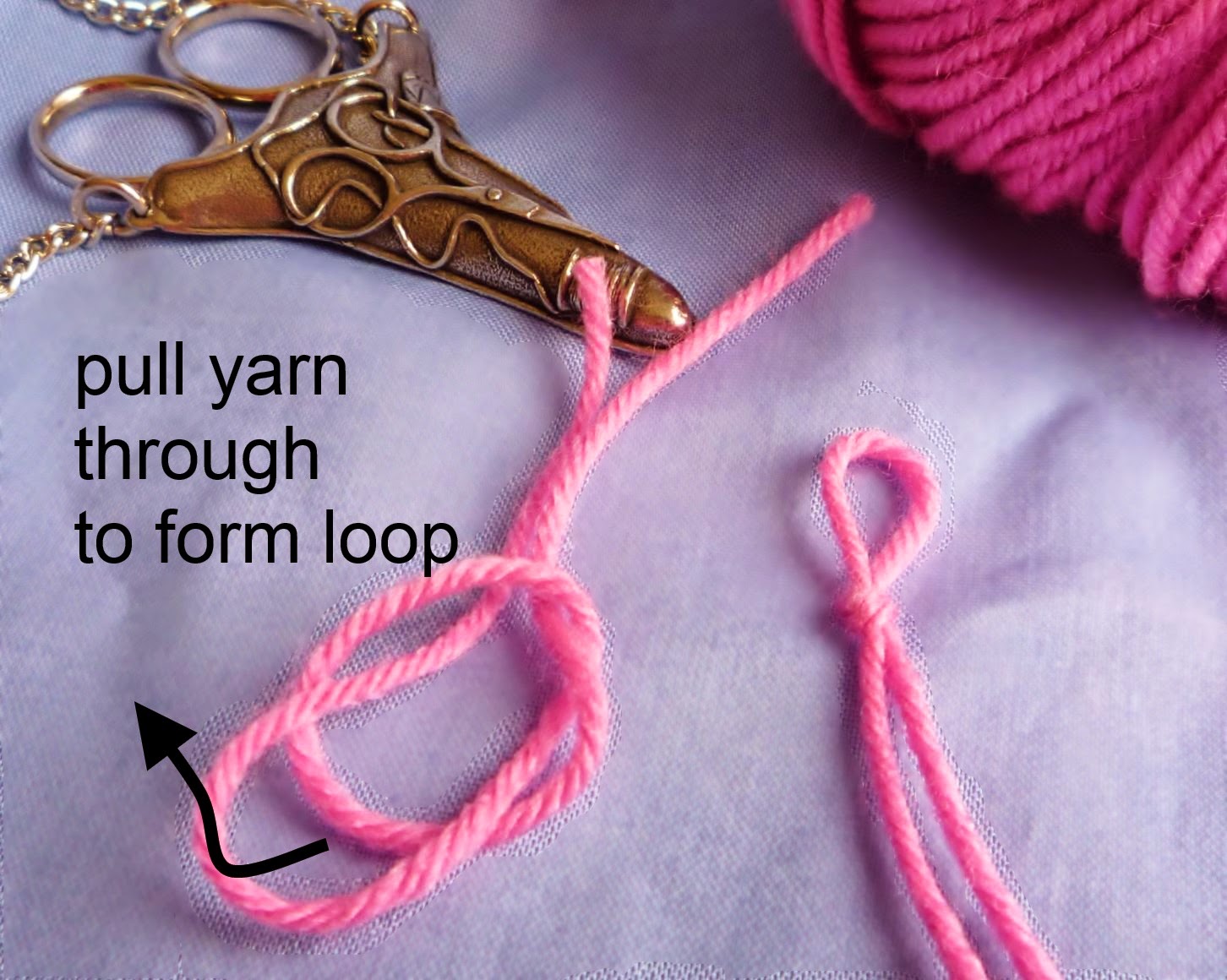 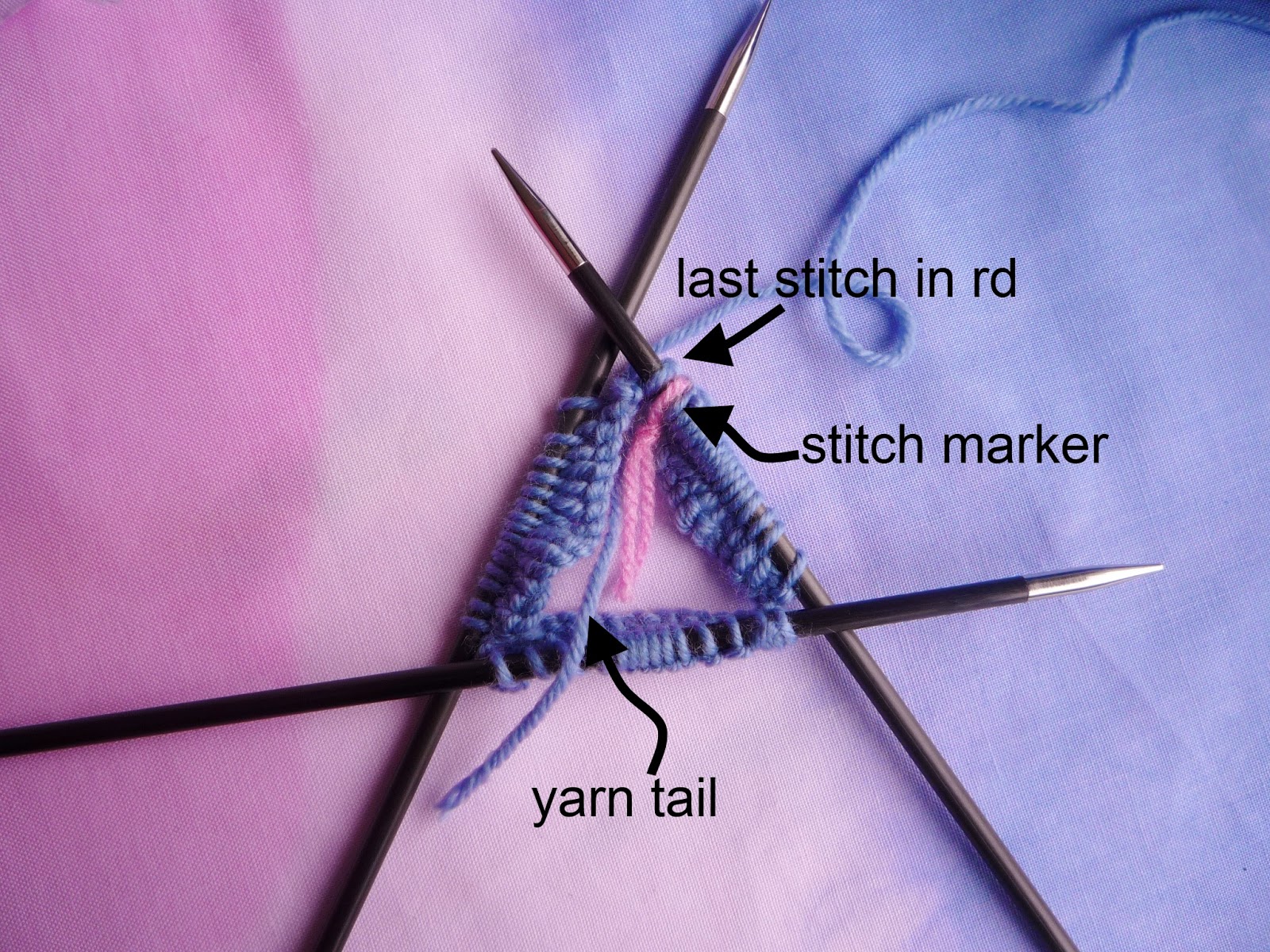 Between needles
Work stitches tight at the beginning and end of needles, pulling the yarn tight to minimise the gap between needles. If this is not done there will be a noticeable vertical line, also known as laddering. Alternatively randomly move a couple of stitches back and forward at the end of the needles as you knit.

Hope this helps a bit and maybe encourage you to have a go with double pointed needles. My Chick and Nest pattern and also my Bunny Crème Egg Cosy pattern are knitted with DPNs and there is still time to knit before Easter. 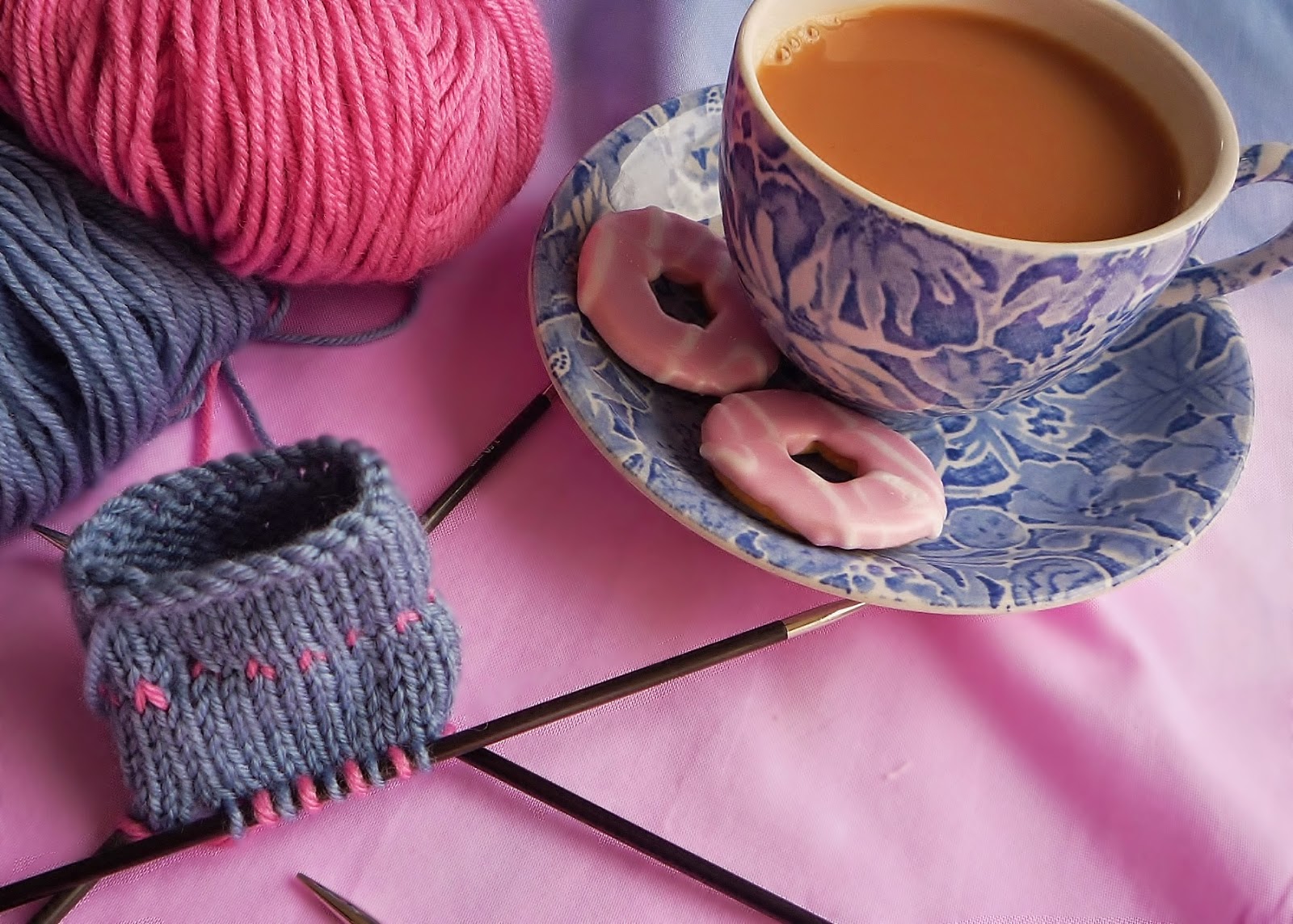